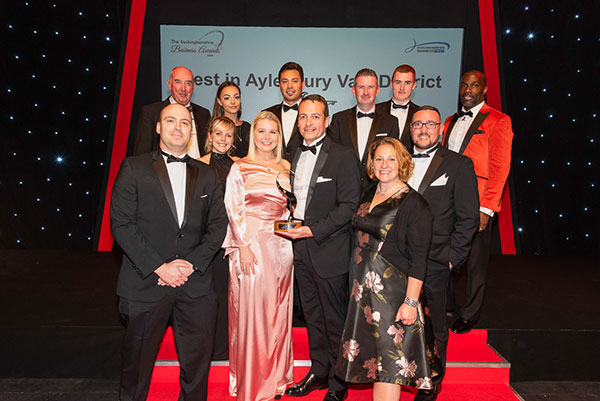 Ashridge Group has won the ‘Best in Aylesbury Vale District’ business award at the Buckinghamshire Business Awards for 2019.

Organised by Buckinghamshire Business First (BBF), a business-focused community which operates as a support hub for businesses in Buckinghamshire, these awards recognise entrepreneurial vision and contribution to the county. Ashridge Group previously won this regional award in 2018 and has now topped that success by retaining the title a year later. They were also named a runner-up in the Growth Business of the Year category.

Based in Aylesbury, Ashridge Group provides services and consultancy to sectors as diverse as corporates, live entertainment venues, rail and critical national infrastructure. Championing a people-oriented approach to business development, the company also looks to develop partnerships with other suppliers in the county as part of its aim to support the growth of the local economy.

On hearing the announcement that Ashridge Group had retained the award for the Aylesbury district, Group Managing Director Emma Walker said: “We are thrilled to have been named Best in Aylesbury Vale for a second consecutive year. We would like to congratulate the other nominees and all the other award winners on the night. Success at these prestigious awards highlights Ashridge Group’s continued commitment to building strong links in the local area and embracing our own values of Diligence, Passion, Competence and Responsiveness.”

WHO ARE LINDENGATE AND WHAT DO THEY DO? Lindengate is located on a stunning five-acre…

Ashridge Group are delighted to announce two new partnerships as we enter 2020. We have…